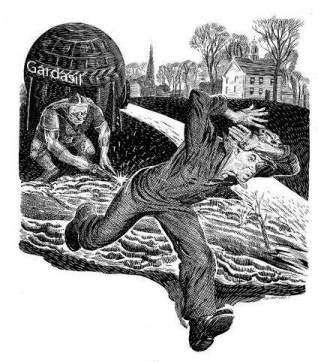 Judy Wilyman had a letter published in Saturday's West Australian, disputing the benefits of vaccination.

In the interests of community health I request that you publish the following scientific information.

She goes on to claim that the childhood vaccination schedule is "not based on science". Vaccines contain toxins. Vaccines are not monitored by doctors. Vaccines are a "known cause of allergies, anaphylaxis and autoimmune diseases". "There is no proof for the theory of herd immunity". "Infectious diseases declined by 1950 in Australia due to improvements in sanitation, hygiene and nutrition."

Ms Wilyman signs herself "PhD Researcher, Murdoch University". It would seem she wishes to claim the imprimatur of her university enrolment to support her claims. Ms Wilman (PhD Researcher) is also, of course, the cohost of Meryl Dorey's recent Perth Antivaccination Rally at the State Library.

A net search shows many articles by her, though her main focus seems to be on the terrible conspiracy that is Gardasil. This four page article is a good example. It is, again, by "Judy Wilyman, PhD candidate Murdoch University". A brief comment at the end notes that her research is supported by Associate Professor Peter Dingle (Murdoch University) and Professor Brian Martin (University of Wollongong - he discontinued her supervision after she moved to Perth) so EoR assumes that this discussion therefore reflects the views of Murdoch University. At least, that's the impression he gets from her constant reiteration of it.

Some of the main points of this interesting argument are:

The article includes 8 references. Half of these are:

as cited in Investigate before you Vaccinate: making an informed decision about vaccination in New Zealand, 2006, published by Immunisation Awareness Society, New Zealand.

EoR wonders why Ms Wilyman (PhD candidate, Murdoch University) has chosen to select this as her main source for her argument, rather than accessing the original sources. He also wonders how unbiased and independent it might be, and whether it would be considered a suitably scholarly reference.

More can be found at Critique of Dr. Diane Harper’s Comments on Gardasil where Judy Wilyman (Phd Candidate, Murdoch University) expresses her horror that:

It is also reported that 32 deaths have occurred plus many serious adverse reactions. There is a statement by Dr. Slade later in the article from the Centers for Disease Control and Prevention (CDC), saying that a third of the possible deaths were left out of the statistic.

A quick check shows that there is little to Ms Wilyman's (PhD Candidate) claims, other than straw person arguments.

There are two HPV vaccines, Gardasil and Cervarix, available to protect against the types of HPV that cause most cervical cancers.

So Gardasil is not being promoted as a cervical cancer vaccine. Perhaps some lazy journalists might describe it as such, but then Ms Wilyman (PhD Candidate) should surely be writing papers about the lax standards shown by journalists?

There are three systems monitoring the side effects of Gardasil.

As of January 31, 2010, there were 15,829 VAERS reports of adverse events following Gardasil vaccination in the United States. Of these reports, 92% were reports of events considered to be non-serious, and 8% were reports of events considered serious. (...) VAERS defines serious adverse events as adverse events that involve hospitalization, permanent disability, life-threatening illness, and death. As with all VAERS reports, serious events may or may not have been caused by the vaccine. All serious reports (8%) for Gardasil have been carefully analyzed by medical experts. Experts have not found a common medical pattern to the reports of serious adverse events reported for Gardasil that would suggest that they were caused by the vaccine. (...) As of January 31, 2010, there have been 49 U.S. reports of death among females who have received Gardasil. Twenty eight of these reports have been confirmed and 21 remain unconfirmed due to no identifiable patient information in the report such as a name and contact information to confirm the report. Confirmed reports are those that scientists have followed up on and have verified the claim. In the 28 reports confirmed, there was no unusual pattern or clustering to the deaths that would suggest that they were caused by the vaccine.

Arthur Caplan (Emmanuel and Robert Hart Professor of Bioethics and the director of the Center for Bioethics at the University of Pennsylvania - not just a 'candidate') argues:

It is possible to see a huge conspiracy behind the appearance of Gardasil. Evil Merck, battered with the huge costs of withdrawing Vioxx, conspires to get a dangerous vaccine into all young girls around the world. They do not care what their parents say, knowing that the girls will become promiscuous while the big pharmaceutical company and its political stooges in the governors’ offices and state legislatures get on the corporate gravy train by mandating the vaccine and laugh all the way to the bank. If this ridiculous scenario is allowed to dominate public discourse, hundreds of thousands of women will continue to die.

Surely, Merck wants to make money from Gardasil. The company made a huge push to get the vaccine covered by insurance plans and public programs, which, in our health care system, requires that vaccines be mandated. Many legislators took gifts from Merck to help promote attention to cervical cancer. This might not be the best way to push a safe and effective new vaccine, but, as is often true in our flawed American health system, battles over coverage for new treatments boil down to money, lobbying, and politics.

With a vaccine as incredibly safe and effective as Gardasil, and others that may soon follow for herpes simplex, melanomas, HIV, and malaria, this country cannot afford to let fear-mongering and crackpot suggestions of backdoor conspiracies be the basis for public health policy. Cervical cancer kills too many women in America and around the world to let that happen.

Apparently not in Ms Wilyman's (PhD Candidate) world. The fact that it "only" addresses 70% of cases (plus lower levels for other strains of HPV) is not sufficient reason to vaccinate. If you develop cervical cancer, well that's presumably just your bad luck and you can be pretty sure you'll probably be able to be cured with treatment if you get it intime and it won't be too much hassle or cost. You might be infertile as well.
Posted by EoR at Monday, June 07, 2010