Intrigued by advertisements on the radio for "e-cell", a product that "rejuvenates cells" and aids "the body's own healing process", EoR sent off for the free DVD (EoR enjoys a good fantasy DVD, and these sort of things are certainly that). The DVD arrived along with a 24 page document extolling the virtues of this machine. 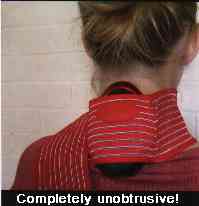 As you read this post, remember some of the standard signs of a magic woo machine: they're invented by lonely geniuses in the face of all current (failed) research, they're based on NASA research (who, nonetheless, fail to invent these devices), they work through improbable methods that are usually discounted by science, they achieve miraculous results, and they cost exorbitant amounts.

The inventor of the e-cell modestly describes himself as "A Technical Genius". Jeff Edwards is "an award winning technology developer" who has worked for many organizations including "Molecular Pharmacology Ltd, Omni LifeScience, Genesis Biomedical, Gobal Energy Medicine, OBJ and Intellect Australia". It should be noted that many of these companies seem to be far from independent employers of Mr Edwards. He also touts Colltech, an ovine collagen extraction company which he opened and which he claims is worth $10 million dollars.

Molecular Pharmacology Ltd was a company that was originally a mining exploration firm and then suddenly changed name and moved into the magic woo machine market. It has yet to earn any income. Its President, CEO and director is Jeffrey Edwards.

Global Energy Medicine distributes "energy medicine" products such as the e-cell and the e-light. These are both woo machines "based" on NASA technology.

Remember the dot com bubble? Just because you can set up multiple companies and list them on various stock exchanges doesn't make the "products" they're selling real or effective.

We also apparently have Mr Edwards to thank for EFTPOS. It seems the banks were about to give up on this concept when Mr Edwards,

Working with IBM, Jeff developed an encryption code that uses two separate microprocessors that ran in parallel but only spoke half the language each. [...] The banks gained confidence in this system and inter-bank electronic transfer was switched on... EFTPOS was born.

So what does this constant urge to set up entrapeneurial companies mean?

Does this now give you some confidence that the person behind this project is so credible and ethical that the device he has developed for injuries to bone and muscles does work? Jeff is dedicated to improving the health and well being of mankind.

NASA consulted with one of America's leading orthopaedic specialists, Emeritus Professor Basset of Columbia University. [...] Initially Professor Barret and his team connected electrodes to human bone. Passing electic currents directly through bone appeared to stimulate growth. However, after a few problems with passing higher levels of energy than a living body can tolerate, it was decided to use electromagnetic induction technology. This enabled the passing of low energy currents direct to the body's bone cells. After some limited success the project was suspended.

So how did Mr Edwards advance this failed research to create his miracle device? He came up with a unique concept - getting scientists to talk together!

Jeff called together a group of scientists to brainstorm their ideas on how to get the body to respond more effectively at the cellular level. There were five of them.

EoR can visualise it now... The world's top scientists rushing to a boardroom in Australia at Mr Edwards' command. White coated figures pacing the floor. Coffee gone cold while equations are scrawled on blackboards. Reams of butchers' paper for the brainstorming strewed over the floor...

Who were these top five scientists? Strangely, four appear to be anonymous, magnanimously refusing any accolade from their supreme achievement (the exception is the fifth "scientist", Mr Edwards himself, who reminds EoR of the fifth Beatle). In fact, they're so unassuming that they don't even appear to have published any of their discoveries and, obviously not wanting to shame their colleagues, don't wish to embarrass them by forcing them to go through the painful process of peer review.

The other members of this Illuminati-like quintet are:

A Physiologist - Senior Sports Physician for the Australian Olympic team and member of the International Olympic Federation.

One of the world's foremost Biochemists.
A Protein Physiologist - Specialist in protein physics and expert at the cellular level.
A muscoskeletal rehabilitation expert.

Of course, these secluded, shadowy figures easily achieved what no one else has.

Fantastic Success!
They found the direction that needed to be taken. Jeff got down to working at the mathematical level. He consulted with many mathematicians and medical experts around the world in this field at a number of universities. The task he undertook was to convert the brainstorming concept into a physical reality.

So what is this amazing breakthrough? Jeff's glad you asked...

What is this amazing Breakthrough!!
Jeff and his team of scientists made a fantastic breakthrough... they found out how injured cells respond... the answer is too complex to explain here, but the short answer is, they respond best to exercise.

Phew! EoR feels the need to rest after that amazing Breakthrough!! Thank God Jeff didn't give the "complex" explanation. It might have been too much for the world to take.

Skipping eleven pages (mainly testimonials, claimed muscoskeletal conditions the e-cell will treat, and a claimed 96% succesful clinical result based on a user survey which is worth less than the paper it's printed on) we come to how the e-cell actualy works. The e-cell itself looks like an optical mouse, and is the same size, but it has one vital ingredient that the optical mouse doesn't. SIM cards. 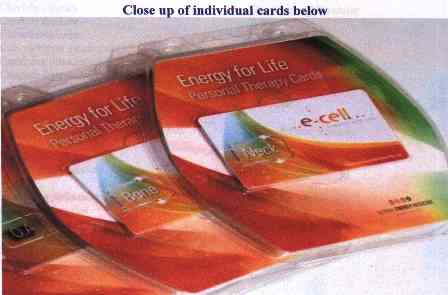 Therapy Cards Are the Brains Behind the e-cell™
Jeff broke the signals down to have them coded onto a Therapy Card (similar to the SIM card in your mobile phone) and grouped them into each joint or injury area. [...] The appropriate therapy card is inserted into the e-cell™ which programmes the internal microprocessor. The processor then transmits appropriate signals to the area under treatment. [...] The Technology in e-cell™ is based on an internationally patented triple waveform process that incorporates simulated movement sequences. [...] Each pulse contains variable signals designed to stimulate cellular regeneration and growth.

So, stick in the "appropriate" therapy card, velcro the mouse-thing to the afflicted area, and the magic code simulates 30 minutes of exercise without doing anything at all! Now, you might just think this is patent bullshit (just like all the disproven "exercise while you rest" machines), rather than patent technology, but you would be mistaken...

Why Can't You Feel Anything?
Whilst some people do feel a slight tingling sensation, the energy fields are so low that most people feel nothing at all.

The claimed frequency of the e-cell is 72-75Hz.

The accompanying DVD, while not a patch on the glossy Dore effort EoR looked at recently, clarifies a couple of points. Yes, the e-cell works on your qi (well, that would explain why science has missed this amazing breakthrough until now, given that qi has never been shown to exist), and yes, there are plans to expand its application potential beyond just muscoskeletal injuries in the very near future...

This amazing piece of nontechnology is available not at the regular price of $A1,295. but at the vastly reduced, limited time only, offer of $A697.

You'd have to be mad to pay that much when you can get the same frequency effects by sticking an optical mouse to your sore bits (plus you'll get the added advantage of the magical acupuncture laser redlight woo).
Posted by EoR at Wednesday, October 25, 2006