Since the West Australian doesn't seem to have added their latest vaccination story to their website, here is a scan of it. 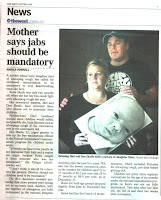 The letters column of the same issue also included some relevant correspondence. 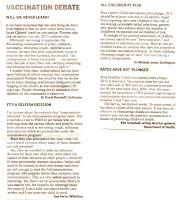 A question for Meryl Dorey

Friday's West Australian featured an article on Sarah Chivers and her nine month old son who is "vaccine-free" since vaccines are such terrible unnecessary things, along with an article claiming child vaccination rates have "plunged".

"The consequences of being vaccinated with side effects and something going wrong are greater than the risk of him catching something and allowing his immune system to fight it naturally," she said.

As far as that goes, Ms Chivers is correct. Vaccines have been so successful that it is unlikely he will catch an infectious disease, even if she chooses not to vaccinate. Unfortunately, it's an incomplete assessment since the "side effects" of catching such a disease include death. Dana McCaffrey is one such case. Saturday's West Australian featured the sad case of Keira Skaife, a mother whose two month old child died of whooping cough.

"It breaks our hearts that people do not immunise their kids and it makes me angry because Keira caught it from someone who was not immunised," the Craigie schoolteacher said.

Rising Whooping Cough rates are also a concern in Queensland and, while they have fallen elsewhere, they are still at abnormally high levels.
Here in Perth, Meryl Dorey, who has no qualifications, is the chosen vaccination expert used by Howard Sattler. She appears alone with no one to balance her lunatic fringe views since, as she repeatedly states, she is not anti-vaccination. Oh, the irony. Can Ms Dorey name just one person she has ever told to get a vaccination? Can she name a single situation in which she would recommend vaccination?
Since Meryl Dorey is soon to appear in Perth to trumpet her unscientific views, perhaps it is time to also ask her, more pertinently, how many deaths are acceptable to her?
Posted by EoR at Sunday, May 30, 2010 4 comments: 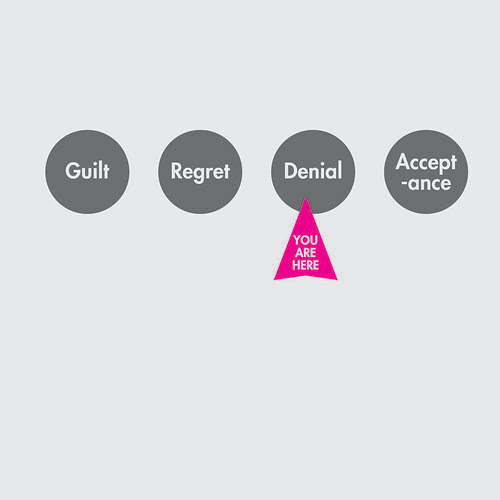 Three quarters of the way to acceptance?

The missing girl, the psychic and the aftermath

On 29 July 1999 Hayley Dodd disappeared near Badgingarra, Western Australia. Nothing further has been heard of her since then.

Chris Roubis is a psychic EoR had never heard of before. He didn't appear on The One, so it's safe to say he's not Australia's best psychic. The few postings on his forum (the majority of which are by himself) indicate that he is something of a niche interest in the psychic world.

On the 31st August 2009 someone calling himself Sir Laughs-A-Lot posted a request on Mr Roubis's forum calling for "anyone with psychic ability in this area, help in any way, to shed light on what happened to her". Mr Roubis's answer(s) are unclear, since he later deleted them.

When Sir Laughs-A-Lot requested further information, Mr Roubis replies "This information was also confirmed and agreed on by another 2 psychics that had the same visions as myself, which has led me to beleive it is correct information, and should be followed." Who are the fellow psychics? Why no names? The following visions were given:

Hayley Dodd is buried under an oak tree near a creek about maybe a 20 mile radius from where she was picked up from. Amongst other things, she was strangled in the end.

Hayley Dodd was a fighter and she was messed up badly to stop her screaming.

It is a very remote outback area with maybe a few farm houses in the distance. There will possibly be other young girls found buried in that area.

This person is in his 40+ with dark brown or black hair, moustache. He looks young for his age.
This person is big and aboriginal, 5.7 - 5.9". Green eyes.
He has a scar on his face.
He is a white male. either taking medication or drugs. Also is a violent drunk.
This guy has a record, been in and out of prison for rape.
This person has tattoos on his arms.
This person has done the same thing to 3 - 6 other young girls.

So, we're looking for an oak tree near a creek. We'll ignore the discussion of the area since Sir Laughs-A-Lot already provided lots of information to Mr Roubis via the forum, including a Google Earth satellite image.

The culprit is Aboriginal and 'big', though 5'7"-5'9" isn't particularly big. He is also a white male, which is a remarkable achievement for an Aboriginal man. There are other victims (3-6), all girls, though why we can't get an exact number is strange.

This man is from the area, and lives with his parents in a unit or Duplex. He does not work. He maybe on disability pension... he takes medication... possibly mental problems.

If you connect him to one murder, he will confess to all the others.
This guy is a serial killer, he wont stop killing children. He needs to be stopped!

The oak tree I mentioned earlier, could be an oak tree or some other huge tree that has a creek not too far from it.

The vitally important oak tree has become a "huge" tree "not too far" from a creek. How many "huge" trees near creeks are there in the area? In the country?

Note also that he lives in a duplex or unit, something that would be very unusual to find in a small country town, and which must surely precisely locate this psychotic serial killing menace.

Lengthy efforts are made to locate Hayley, and to verify Mr Roubis's information. Suffice it to say that the area has no oak tree, no units, and no duplexes. The location highlighted by Mr Roubis, strangely, also contains no trees or creeks. Does he doubt the veracity of the voices he hears?

Mr Roubis provides more spiritual insight: "Near a creek, trees and rocks." Well, that narrows it down to any part of Australia that isn't desert. It's a start.

Things go quiet until April of this year, when Sir Laughs-A-Lot returns, having noticed that the criminal is simultaneously White and Aboriginal, asking "Can you clarify for me what you meant by that - could he be of mixed aboriginal / white heritage?" Mr Roubis confirms that he is correct. So, Sir Laughs-A-Lot would appear to have psychic gifts at least the equal of Mr Roubis.

Sir Laughs-A-Lot continues his efforts with another (unspecified) psychic who is apparently working with the victim's family. This psychic is "spot on".

At this time the thread is noticed by a sceptical blogger, who posts about the way psychics seem to fester around missing persons and murders, without adding anything to the investigations other than to muddy the waters. Sir Laughs-A-Lot posts a comment to the sceptic's blog, containing mostly personal abuse and missing the point entirely (a copy of his post is at Mr Roubis's forum). In another post to Mr Roubis's forum he rants on (edited):

You sir are a dickwad - your mummy's boy issues are clouding your judgment.

Your rant has done nothing but upset the family - well done Mr caring citizen with a gob but no brains attached to it.

Keep your rants to yourself and do us all a favor.

Your not worthy of the internet - your not saving anyone from anything they were not willing participants in.

No sir your a bigot with a big mouth and not much else - who's preparedness to express his somewhat childish opinion has undoubtedly caused the family some grief.

Leave it alone is my sincere advice to you (...) - the internet is not nearly as anonymous as you might think and I'd hate to have to act to protect the family's interests in this from here on in.

Chris I've half a mind to track this (...) bigot down and give him a phat lip and post the pic here for all to see.

EoR leaves it to his readers to decide who is bigoted and ranting here, but he is certain that threats of violence via the internet are just as much a criminal offence as if they were made face to face. You, Sir Laughs-A-Lot are a bully and a coward.

As a result of the specific threats of violence made by Sir Laughs-A-Lot, the sceptic blog posts relating to this matter were deleted. Mr Roubis supports these threats and has allowed the threats to be posted to his forum and to remain there (and this is why EoR hasn't linked directly to the blog).

Mr Roubis and Sir Laughs-A-Lot have no intention of debating the matter (nor do they have an obligation to do so, they can simply take their magical beliefs and live in their own world), but the actions they have engaged in show how fragile those beliefs are, and do little to convince anyone to accept them, or to listen to such arrogance and aggression.

EoR wanted to ignore this sad little story altogether. Mr Roubis clearly has other things much more important to do than provide psychic revelations, and EoR is not in the business of providing any publicity to him. The reaction from these two individuals, however, deserve to be made more widely known.

Mr Roubis also has a strange attitude to the police. On Facebook he states "Unfortunately police are just public servants. If it was a politicians child, they would of found her long ago" and, on his forum post, "This guy lives in the area, and has a record. C'mon W.A Police!!!" which seems a strange attitude from a man who is proud of the fact that corrupt AFP (Australian Federal Police) Officers aided and abetted his lawbreaking earlier in life, according to his own biography.

Also, according to his biography, he apparently has "40 or more other guides" other than the main few who all chat to him at various times. Forty or more! It'd be like a horrible party chat line. And not one of them can provide any concrete information that would actually be of help.

As crimebuff (another victim of Sir Laughs-A-Lot's unwarranted abuse) comments on the forum:

I personally wouldnt like to focus in too much on the basis of a psychics reading, unless you can find more than one psychic that concur with each other, I am aware of the tremendous problems others have had taking literally what a psychic has told them, and it seems 40 psychics all came up with different scenarios,places to look etc.

In other words, if you make enough random guesses eventually someone, somewhere might be right. But it doesn't make them psychic. Only lucky.
Posted by EoR at Saturday, May 29, 2010 No comments: